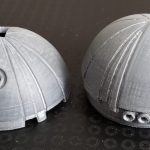 Greetings from the bunker! Much like everyone else I’m doing the social distancing thing. You’d think that would mean I have tons of time for hobbies and projects but that hasn’t been the case. That doesn’t mean I haven’t been working on stuff! This is the first complete project I’ve had in a while and
Read More 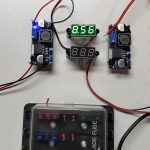 Been a while since I updated. I had been running pretty full tilt on printing R2’s body. When I finally stacked everything together I realized I am further ahead then I thought. Still a TON of sanding to do and the legs will be long prints but if I buckle down I might still hit
Read More 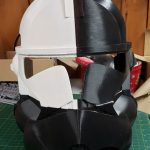 A while back a friend asked me to print him a Phase 2 Clone Helmet. It took me far too long to get the project started but once I dug in it came together fast. It was printed in 18 parts, around 1.5 KG of filament and close to 100 hours of printing. I started
Read More 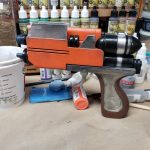 My wife Jessica has jumped into the cosplay scene starting with Rebel pilot Hera from Star Wars Rebels. She is making great progress on the jumpsuit, has done a trial make up run, and has ordered her lekku. This puts her miles ahead of me when it comes to actually completing a full cosplay. So
Read More 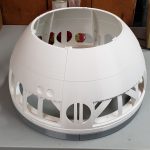 I’ve been printing a lot lately but not posting much. I’ll try to get back to a regular routine. The biggest thing I want to talk about is the progress on my full size R2 unit! I’ve had the new printer running almost day and night working on the dome and I’ve been reading a
Read More 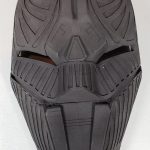 First I want to thank everyone who voted in my poll. It is really encouraging to know people are reading and interested in my projects! Surprisingly the Sith Mask was the winner. I thought for sure it would be Han’s blaster. I started the Sith Mask as part of a cosplay idea for an original
Read More 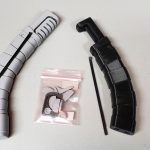 I’ve mentioned a few times I have a problem starting projects then not finishing them. While I’m making good progress getting my Mando helmet printed (more on that in another post). In the mean time I’m looking to get something that is already printed finished. I just can’t make up my mind what to do.
Read More 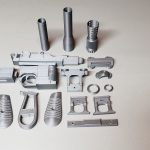 One of the many projects I started and would like to finish this year is Han Solo’s Blaster. A modified DL-44 that the character has carried with him in every movie. I find it to be as iconic as any lightsaber! Last year I finished printing it out. The sanding and painting process is a
Read More 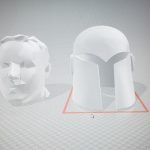 After a convention a couple of years ago I decided I wanted to join the Mandalorian Mercs. It’s a costume club for fans of Star Wars, specifically Mandalorians (like Boba and Jango Fett). In addition they are a non-profit who raise money for great causes. Our local group is full of wonderful people I’ve met
Read More 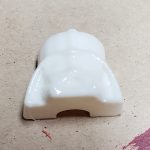 One of the hard parts of 3D printing is getting a nice smooth surface. Typically an print has tiny lines where the layers and layers of plastic have been build on top of each other while printing. These are commonly called “Step Lines”. Until recently I’ve been printing with PLA while you have to sand
Read More

Working on a set of extended fingers for a friend.

Finished this Nintendo Switch dock for a friend th

Starting th Bespin Gambit. Which team should we t

Managed to get the Heroes from the Bespin Gambit p